CHRISTOPHER FORSEY began his art career as an illustrator in a publisher's studio after studying art and graphics in Bristol. He enjoys experimenting with paint which has led him towards a mixed-media approach to his work, combining watercolour, acrylic, pastel and gouache. He is exhilarated by colour and surface and enjoys creating textured layers of dry-brushed colour that allow hints of complementary hue to glow through, thus creating an exciting surface of scattered, broken colour.

He specialises in landscape subjects, exploring the themes of man-made alongside the organic: buildings by water; structure emerging from a rocky cliff, sometimes with figures contributing to this theme, inhabiting the middle ground between buildings and the wildness of nature. He is inspired by downland, coastal scenes of the UK and the Mediterranean, cafe life and townscapes. He tries to capture the sense of a place at a specific moment, season or time of day, always endeavouring to bring passion and immediacy to his work.

Chris was awarded the prestigious F.Donald Blake Award for a contemporary watercolour by the Lincoln Joyce Gallery in 2006 at the RI Spring Exhibition and also the Matt Bruce Memorial Award for light and colour at the 2007 RI exhibition.  Chris was elected a member of the Royal Society of Painters in Watercolours (the RI) in 2010.  He is also a member of The Society of Graphic Fine Art.

"I went to college in Bristol to study Graphic design, but got a job illustrating in London when I left, in a studio for a London publisher. I always had a desire to be a landscape painter and in the 1990's changing work practices encouraged me to become a full time artist.

My early inspiration came from admiring Turner, Bonnard and Hodgkin, and also watercolourists such as Rowland Hilder and also John Piper whose work inspired me to try combining different media. I enjoyed and had success using both and became a full member of both the Royal Institute of Painters in Watercolours and the Society of Graphic Fine Artists in 2010. I have had many solo exhibitions in Devon, Surrey, Sussex, Newcastle, Norfolk and Scotland and I have made a number of DVDs about my work. I have recently had my first book published, MIXED MEDIA LANDSCAPES AND SEASCAPES by Batsford publishers. I also recently painted two 7’ x 3' for a Saga Cruise ship, now sailing the seas of the world.

Having begun painting mostly in pure watercolour, I began using acrylic and then began to use more mixed-media, combining Watercolour, Oil Pastel, Acrylic and Acrylic ink. My inspiration mostly comes from landscape, coastal and urban subjects. I use some unusual tools to paint with including cardboard wedges, cellophane, twigs, fingers and rollers along with wide flat brushes and palette knives.

I enjoy the unexpected, expressive results from using unusual tools and media combinations used on both paper, board and canvas support.

I am always trying new approaches with my painting and the thrill of creating a large, expressive response to my subject never diminishes."

Sort by:
New to Oldest

New to Oldest Relevance Title, A to Z Title, Z to A Price, low to high Price, high to low
View: 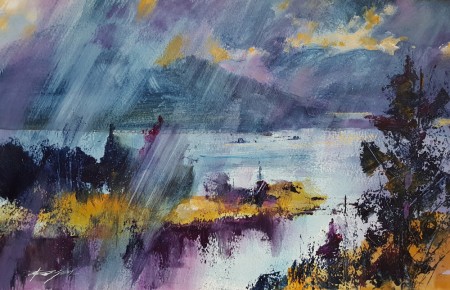 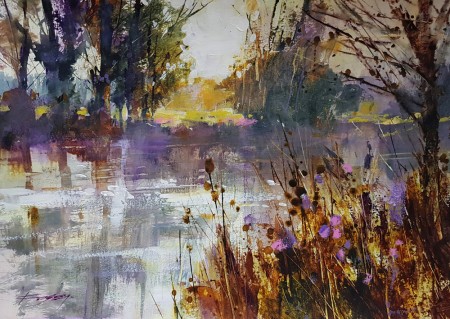 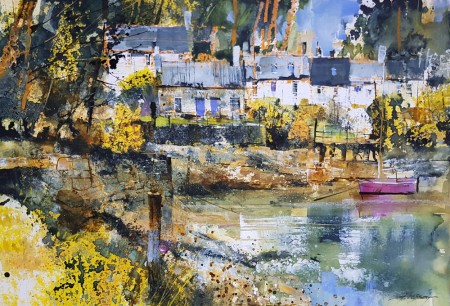 Spring In the Cove 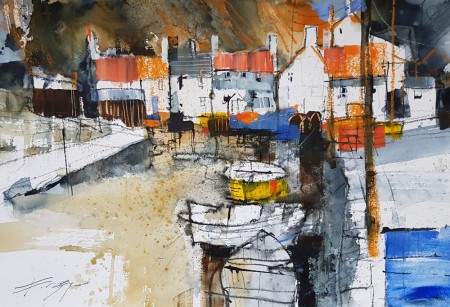 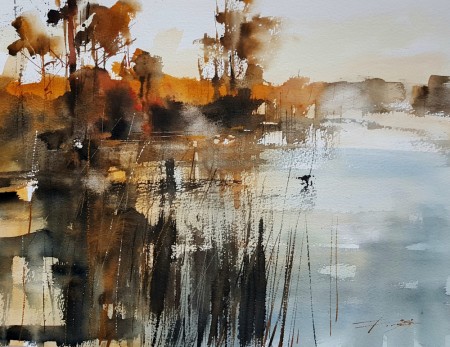 Loch Side Mist and Silhouettes 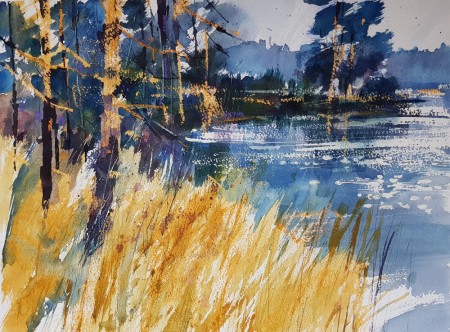 Fir Trees By The Loch 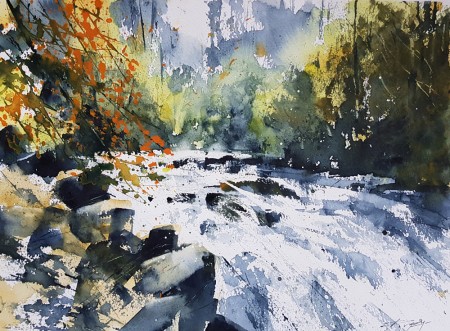 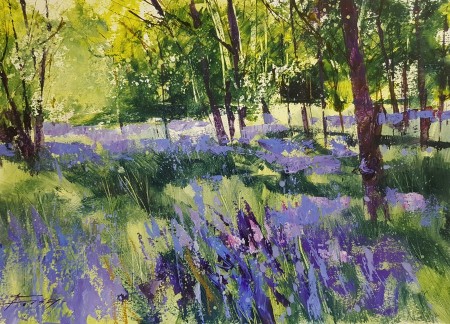